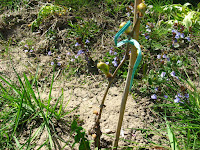 So did I make the right decision? I'll know in a few more years, but that's how you find the perfect grape. There are no shortcuts. I'm pleased so far but only time will tell. I hope this information helps others who may be interested in this grape. Please feel free to ask any other questions you may have about it.
Posted by David at 1:44 PM 23 comments: