More About the Regent Winegrape... 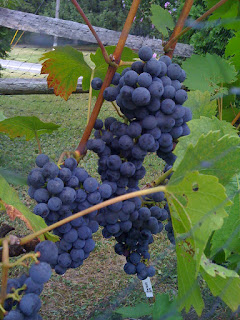 I can still remember the old Paul Masson commercials where Orson Welles would sophisticatedly state in his sonorous voice "We will sell no wine before it's time." I can't help but think of that mantra as I write this post. It's one I've been wanting to write for a long time now. The only problem was, I needed time, time and experience growing the Regent grape and making wine with it. How else could I say anything worthwhile, helpful or even credible about something as biologically complex and sensually sophisticated as winegrapes. Not to mention the making of their luscious byproduct. Alas, I finally believe that I have that experience, and I would like to share it with you. Way back in January 2009, in this post: The Regent Winegrape

I detailed how I came to plant this obscure winegrape as well as some background information on it. I mentioned that at that time I was hard-pressed to find anything that would help me make an educated decision as to planting it in my vineyard or not. Not much has changed in that regard. Aside from a few bits of information here and there, you just can't find much to go on. After much consideration, I went with my "gut" and ordered the vines. I have been cultivating and making wine with the Regent winegrape now for six years! It's amazing how fast time flies. I just pressed my 5th vintage and it's finishing primary fermentation in glass. Was my "gut" right? I would have to respond with a resounding yes!

Let's get this out of the way first, Regent is not a perfect grape. It has some disadvantages. But for me in my cool-climate, USDA hardiness zone 5B, upstate New York vineyard, it has been excellent. It breaks bud later than many hybrids or Vinifera varieties, on average early to mid-May in my climate. Thus, it usually avoids spring frost damage. It is not overly vigorous and is maintains a relatively open canopy with an upright growth habit. That also facilitates VSP training, which I prefer. Regarding winter hardiness; this was one of my biggest concerns when I was deciding whether to plant Regent or not. I have not found much information on the Internet about this subject and I still don't. What I do find says that I should not be able to grow Regent in my climate in most years, ranking it's hardiness with most Vinifera varieties at about 0F to -6F. I believe there just isn't enough experience with the grape in cool to cold climates. That being said, here's what I can now tell you has been my actual experience over the past 6 winters with my 30 Regent vines. Below zero temperatures are an annual occurrence in my vineyard. The question is how low will it go? The potential exists on very rare occasions for winter lows as cold as -20 Fahrenheit. It hasn't happened in the 13 years I have been growing winegrapes. 0 to -10 Fahrenheit is more common. I have however, experienced -13 and -14 Fahrenheit on at least two established and recorded occasions with Regent. Both times Regent survived handily with absolutely no trunk damage. It has however suffered bud damage in both of those years. Those temperatures have reduced my crop by up to 60% in the worst year. I will add though, that in those years of reduced crop, I have had made some of the best wine from my Vineyard with Regent. Regent is a good producer and has consistently attained full maturity for me by the end of September. It has achieved sugar levels of 24 degrees Brix in 3 of the past 5 harvest seasons. The lowest Brix I have seen is 22.5 degrees. As far as acid is concerned, T.A. levels ranging from .4 to .6 are what I have seen. I have not had any PH problems, but you do need to keep an eye on it in very hot years. A few other observations I have noted are that the skin on the grapes is thin and with such nice sugar levels wasps love to bore into the grapes and eat them until they are just empty shells. Traps have helped minimize this for me. Also when the grapes need to hang longer in cooler years, they tend to being to fall off the bunches when very ripe. Not a huge problem, but worth mentioning. It has excellent disease resistance, with only a bit of Black Rot posing a problem in some years for me. All in all it has been very easy to grow in my vineyard. 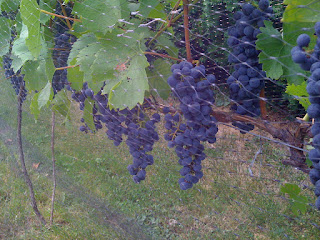 The wines I have made with Regent are very dark, but not inky like many hybrids. It has strong cherry notes, also common of hybrids, but a very good tannin structure. The tannins are on the medium side. My best vintages have had notes of dark fruit, earth and even chocolate. They have been really good. Under-ripe, the grape produces a herbaceous and harsher wine with more of a sour cherry component. Over-ripe, the PH can get out of control and make a flabby wine with a black olive kind of flavor. It's not terrible, but I chose to blend it with a Noiret to balance it out just a bit that year. I'm still really learning how to best handle this grape in the winery, but so far I shoot for a Brix of about 23.5-24, T.A. of .5 and hopefully a PH of less than 3.6. I have tried different yeast strains such as Red Star Pasteur Red, Lalvin 71b-1122 (usually used for whites, but can be used to reduce acid in hybrids) as well as Lalvin Bourgovin RC-212. I have settled on the Lalvin Bourgovin so far. I always do a malolactic fermentation even in years of lower acid because it really adds a nice vanilla and caramel hint as well as a velvety feel to the wine. I would rather have those flavor components and adjust the acidity if I need to, so I feel it's a must do. Regent can handle a lot of oak and I always oak it. I have found it best to avoid toasted oak because it increases the black olive component to an unpleasant level, even when the grapes are not over-ripe. I like to macerate 3-5 days and absolutely no more. Err on the side of less. The less ripe, the fewer days on the skins. But still no more than 5 days even when perfectly ripe. 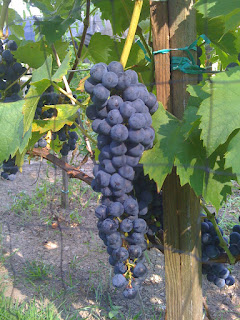 I still don't think I have enough experience with Regent to have really dialed it in yet, but I'm determined to keep working with it until I find the right methodology. Of course, that will differ from vineyard to vineyard, climate to climate, and with personal taste. I am really pleased with where I'm headed with it though, and I feel the best has yet to come. A neighbor of mine who is an Italian immigrant, has also planted Regent after seeing my vines. He leans toward a more "traditional Italian" technique with natural fermentation, less emphasis on science, and even mixing grape varieties. However, he made a 50/50 blend of Regent which he grew, and Merlot grapes that he purchased from California. The resulting wine won 1st place at a local wine competition held at an Italian community center in 2014. It beat the 100% Merlot wine he also made that year from the same California grapes. I'm not sure what that means to those of us interested in growing and producing quality varietal wines, but I think it's a testament to Regent's potential and quality.

I can't help but wonder what Orson Welles might say if he were around to taste what I consider to be my best Regent vintage to date, from 2012? I'm not sure, but hopefully it would be something along the lines of; "It's almost time, You're getting there". But than again I've never tried Paul Masson wine. It seems like just a mass produced bulk wine. Was it even any good? I guess it's all a matter of personal opinion and taste.
Posted by David at 10:56 AM 29 comments: